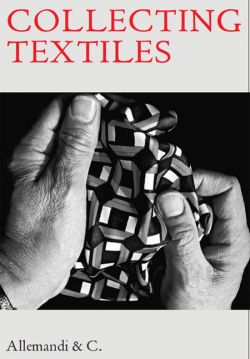 Which are the spirit and the motivations of a fabric´s collector? What drives him to try and rack up textile articles without ever being satisfied? Collecting Textiles, the book edited by Margaret Rosina published by Allemandi, gives a series of answers leading the reader in beautiful travel between different kinds of textile collections. With an introduction that gives a significant portrait of the collector Antonio Ratti (which includes an essay by Thomas P. Campbell, director of the Metropolitan Museum in New York), the volume continues with interesting speeches and unpublished images. This particular way of collecting is explained through three key themes: the figure of the collector (Annette Schiek´s Deutsche Textilmuseum Krefeld, Aurélie Samuel Musée Guimet of Paris, Maria Paola Ruffino´s Civic Museum of Ancient Art in Turin and Seth Siegelaub, founder of Stichting Egress Foundation), the identity of the collections and the birth of the textile museums (Angela Völker the MAK in Vienna, Jacqueline Jacqué the Musée de l´Impression sur Etoffes Mulhouse, Eulalia Morral of the Centre de Romeu Documentaciò the Museu Tèxtil Terrasa and Filippo Guarini of the Textile Museum of Prato), and finally the complex problem of exposure of textiles (Magdalena Droste, a student of the Bauhaus textiles Sonnet Stanfill and the Victoria & Albert Museum in London).